The Priest has a Name: Rev Fr Anatolius Mauduit 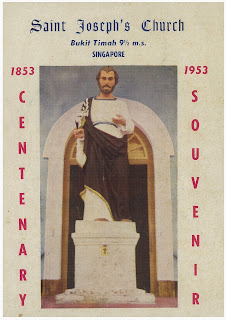 The priest has a name and it is Rev. Fr. Anatolius Mauduit. From a most humble post in 1847, Fr. Mauduit gathered his flock and built St Joseph's Church in 1852-53. There he served with love and devotion as the first parish priest till his death on the 1st of April 1858.

He was none other than the French missionary who sheltered Alfred Russel Wallace in 1854 - a visit that Wallace recounted in his book The Malay Archipelago. Fr. Mauduit's tomb can still be found in St Joseph's Church today. As a former parishioner myself and a frequent reader at Mass, I have had the rare privilege of seeing it in the private wing of the church.

Wallace's stay at St Joseph's Church did not escape the attention of the earlier parishioners too. In the Centenary Souvenir Booklet celebrating 100 years from 1853 to 1953 (front cover pictured above), editor R.S. Boswell wrote about it in his essay The Church of St. Joseph. He accredited Fr. Mauduit as having had a guest the famous naturalist and traveller A. Russel Wallace and drew excerpts from The Malay Archipelago that read as follow:

"I lived for several weeks at a time with the missionary at Bukit Timah, about in the centre of the Island where a pretty Church had been built and there are about 300 converts... My friend at Bukit Timah was truly  a father to his flock. He preached to them in Chinese every Sunday, and had evenings for discussion and conversation on religion during the week. He had a school to teach their children. His house was open to them day and night. If a man came to him and said, "I have no rice for my family to eat today," he would give him half of what he had in the house, however little, that might be. If another said, "I have no money to pay my debt," he would give him half the contents of his purse, were it his last dollar. So, when he was himself in want, he would send to one of his wealthiest among his flock, and say, "I have no rice in the house," or "I have given away my money, and am in want of such and such articles." The result was that his flock trusted and loved him, for they felt sure that he was their true friend, and had no ulterior designs in living among them."

Boswell also recorded what Mgr. Verrolles Vicar Apostolic of Manchuria (who paid a visit to Mauduit in 1850) has to say of Fr. Mauduit's zeal which had overcome all obstacles - "Day by day, his little fold increases. His neophytes are of a simplicity and fervour worthy of admiration. They all are poor, their missionary still poorer than them all; he considers himself lucky when he gets enough rice and a few plantains for his meal."

Boswell also gave his readers a rare glimpse into the history of the Catholic Church in Singapore, and some very interesting anecdotes such as Fr. Couellan fighting off a tiger with his umbrella, and of a hundred Catholic Chinese in 1846 crossing from Pontain to the Island of Singapore and landing "at a point near Kranji and a bit lower down near the present junction of Woodland Road and Mandai" where a temporary Chapel was erected.

The above information is uniquely parochial and in presenting the content of the Centenary Souvenir Booklet, I hope to honour the name of Anatolius Mauduit and encourage exactness of reporting by any scholar writing the life history and achievement of Alfred Russel Wallace to put Mauduit's name in his rightful place.

Boswell's essay also revealed the existence of diary by Mauduit. He wrote,"The 8th May, 1853, saw the blessing of the new Church of St Joseph by the Rt. Rev. Bishop J.B. Boucho (according to the true extract from Rev. Mauduit's diary, recorded again by Rev. Fr. Issaly in the year 1866)." So, as can be imagined, the hosting of Wallace at St. Joseph's Church could very well have been recorded by Mauduit in his diary. The serious scholar should find this diary a priceless source of verification besides other records that can be found from the archive of the Roman Catholic Church of Singapore.

I take great satisfaction and relief in sharing the above. Relieved... because the name Mauduit has resided in my sub-conciousness for as long as I can remember. And coming off the talk I gave at Wallace Exhibition at Singapore Science Centre recently, I am pleased I waited no longer. Like writing A Light Above Pedra Branca, this piece - The Priest Has A Name - had me feeling very light, happy and blessed. To Everything There is a Time and Place. Merry Christmas! 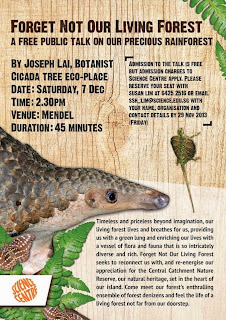 Labels: Forget Not Our Living Forest

Postcards to Our Dear Prime Minister

It has been 20 years of field experience in our forest and many a moment I have been spellbound and moved beyond words to express my love and joy in paintings. But words are beautiful too. Why not combine both? The idea of transforming my paintings into postcards was borne. This is surely a novel way to reach out to fellow Singaporeans and provide them a simple platform to enter into a meaningful dialogue on an important issue close to home - our rain forest.

As you already know, Cross Island (MRT) Line has been proposed and according to the initial pronouncement, the track will cut straight through our rain forest belt north of MacRitchie Reservoir - in a part of Central Catchment Nature Reserve that has been rigorously studied and reported to be significantly rich in biodiversity. Fondly known as MacRitchie North, this lowland Dipterocarp forest which comprises a unique freshwater wetland, is immediately east of Bukit Timah Nature Reserve; the two only recently joined by a $17 million dollar bridge designed specifically to facilitate animal movement across BKE expressway which for 20 years have seperated the two reserves.

Since the launch of my humble postcard project, I have entered into numerous conversations with people. Many like to write but asked how. My short and spontaneous answer has always been to write from your heart. Thinking back, I can't help smiling. That's how I write. I think I do owe people the long answer.

Writing should never be a chore. It must spring from purpose and conviction which must in turn spring from personal experience. Remember the happiness and that deep sense of being you found in Nature? When you write, Happiness will bring with her two great friends - Hope and Dream - of a better world. When you write genuinely from your heart, your words will flow with the under- current of these three. So, to start with, reflect on these and believe why you want to write.

Now that you have set the foundation rock solid, you are ready for the practical. Take out a piece of paper and scribble all the thoughts you have on the issue for a week. By then, you would have spun a spider web, and you would have found your inner voice chord. You will be pleasantly surprised to find how well note-taking helps in conceptualising thoughts.

Now that you have found your voice - those key ideas and words - put that piece of paper far away. Have faith and write straight away. Start with the first word, a first simple sentence, that comes to mind. The rest will follow for sure.

When you write, keep it simple. Be polite and respectful. Begin with appropriate salutation and end with a thank you and legitimise your voice with proper identification. A name just won't do. Put in your NRIC number or contact, and don't forget the date. The small space of a postcard is sweet and short and you will find it a great start to writing precisely.

Lastly, what is all this instruction (above) without leading by example? So, let me share with you some that I have written (below). My most profound wish is for people to participate in dialogue and speak for Nature before it is too late to do so. Wait no more. Write now!

If you like to acquire my postcards, please write to me at joelai1959@gmail.com. 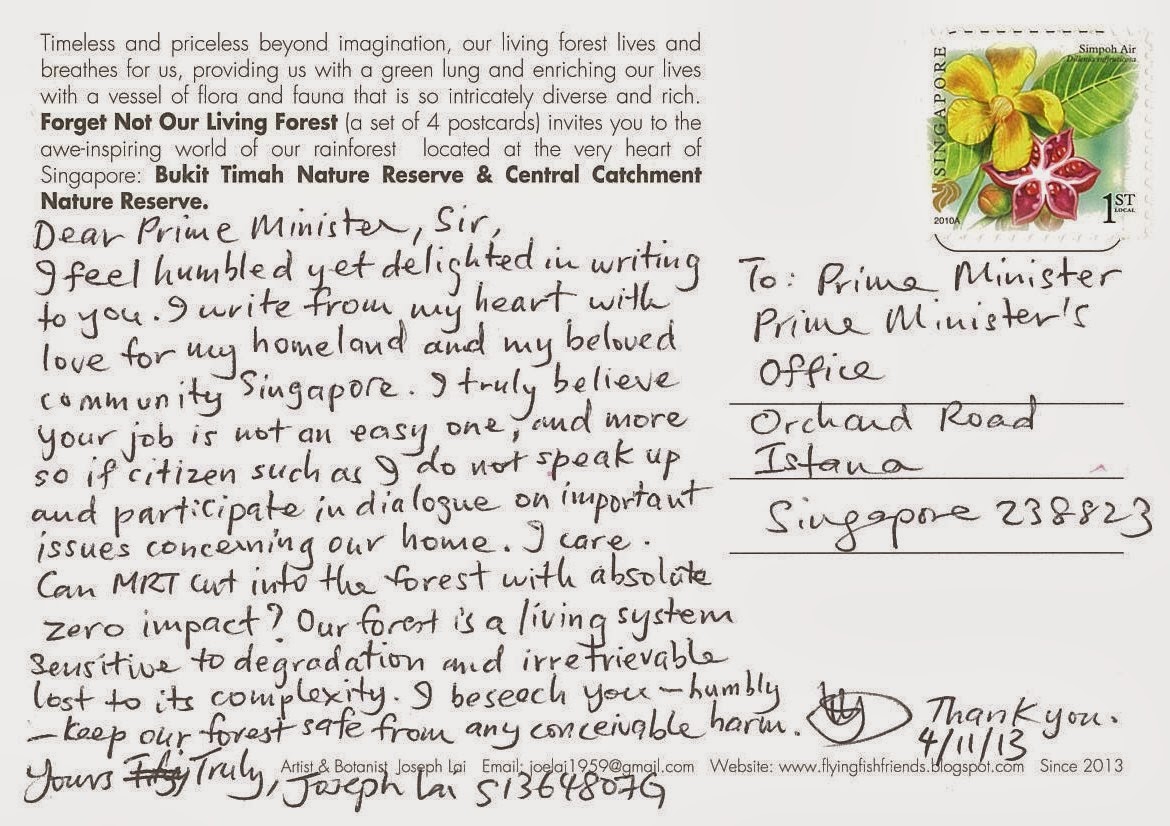 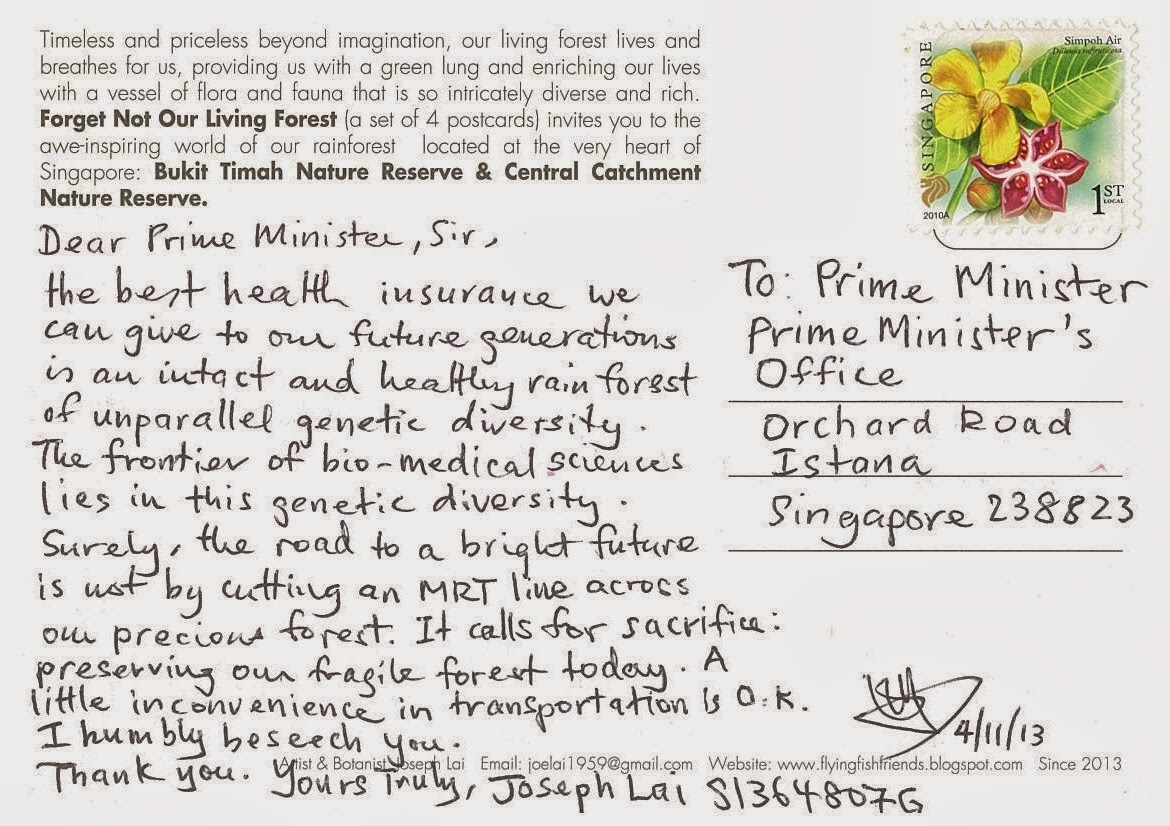 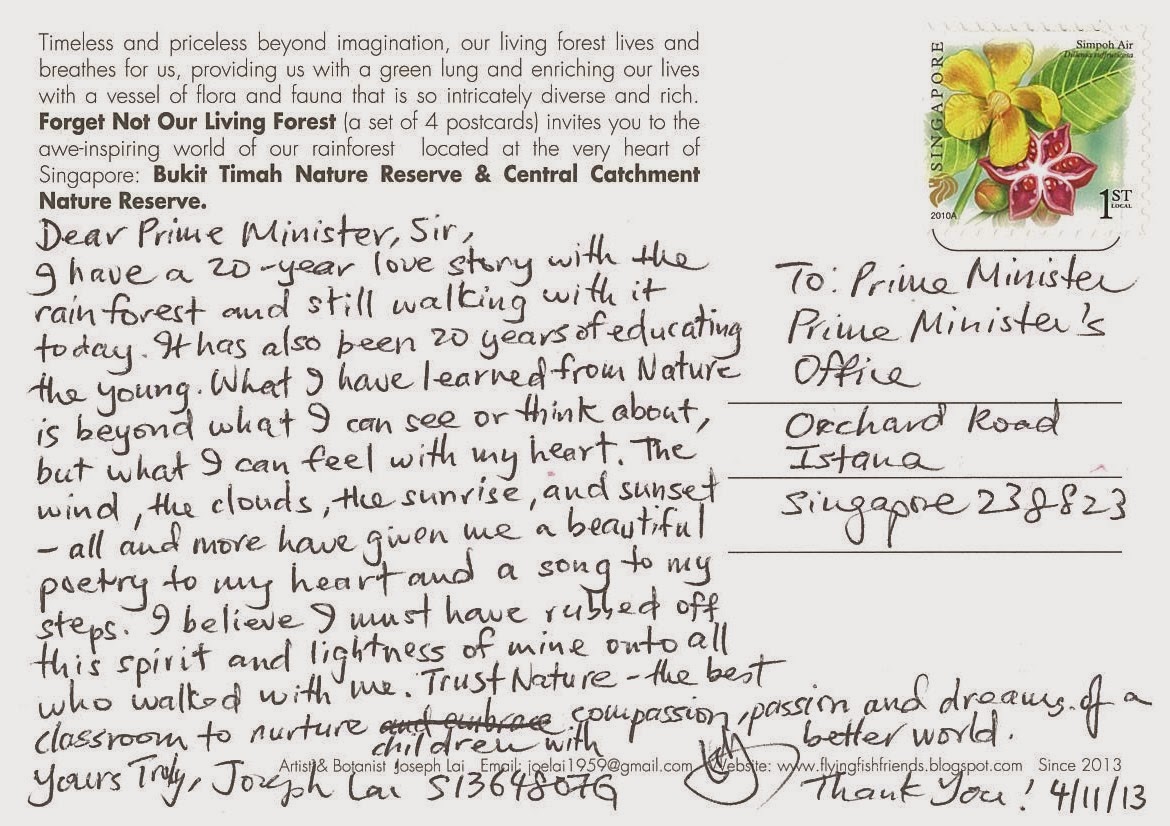 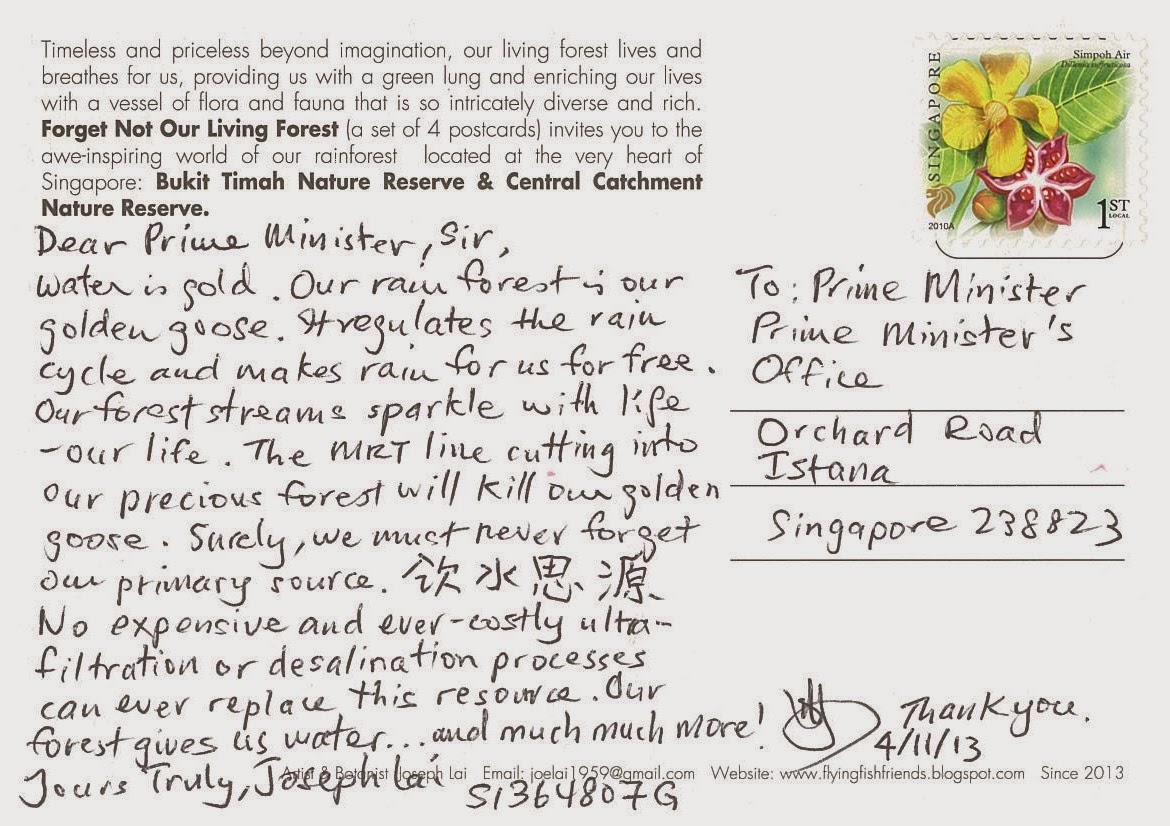 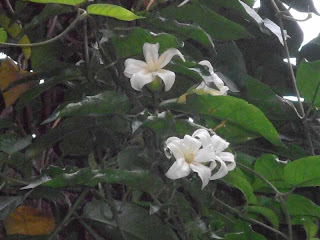 No two field trips share the same complexion except in being extraordinary and special; where new things are learned and new insights gained.

Last Sunday's unhurried exploration in MacRitchie forest is no exception. It is as extraordinary as I would like it to be. I need only to surrender to serendipity and have eyes as fresh as newly opened flowers. My heart feels light, my mind illuminates and I walk as tall as the trees. My forest, my home - my home sweet home. I love it with all my heart and might.

The first and only known local collection of Stephanotis maingayi was Hullett 147 at Changi (undated). A good sense of time, however, can be cultivated in knowing who Hullett was.

Richmond William Hullett (his full name) was a most respected scholar and the longest serving headmaster of Raffles Institution in Singapore (1871-1906). Through 1880s and 1890s, Hullett was a prolific plant collector. He took every opportunity to collect and record exotic plants during breaks in the academic calendar for school holidays. His collecting work on Mount Ophir (Malaysia) is especially noteworthy.

In sharing with you Stephanotis maingayi, I would like to draw you to Hullett's biography (found here) which speaks volumes of his great intellect and inspired presence which touched so many a student under his care. Among them were our respected forebears Tan Teck Soon and Lim Boon Keng.

I leave with you here the nice warm feeling of rediscovering a long lost climber once recorded in Changi, now in MacRitchie.

Footnote: Stephanotis maingayi belongs to Apocynaceae Family. Perhaps Singaporeans should be more acquainted with the family. After all, our $1 coin is adorned with the image of the Periwinkle and the 50 Cents coin the Yellow Allamanda; both being plants of Apocynaceae.